Whitey’s Premium Chili can be enjoyed across the country at various establishments and through Whitey’s Premium Authentic Chili brokers. Let us know where you live and we will do our best to find the nearest place for you to purchase some.

Send Us a Message 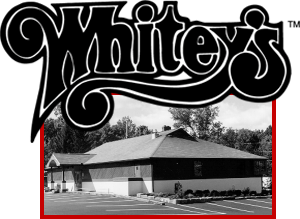 Whitey’s Booze N’ Burgers has truly withstood the test of time, dishing up mouthwatering burgers, classic cocktails and good times since 1953. Whether you stop by to enjoy a cold beer and a juicy burger or a bowl of our famous chili, Whitey’s never disappoints. It’s a great place to catch up with old friends, cheer on your favorite Cleveland team ( Our Cavs are 2016 NBA World Champs ) or join in on a volleyball game. Conveniently located between Cleveland and Akron, local patrons and visitors have been coming to Whitey’s for decades to get their comfort food fix. In 1994, The Richfield Coliseum was built to be a Northeast Ohio sports and entertainment mecca, which helped to drum up new customers for the local tavern. Then from 1974-1994, the Cleveland Cavs made The Coliseum their home, which put Whitey’s on the map!